Time for action about nuisance commuter parking in Molesey 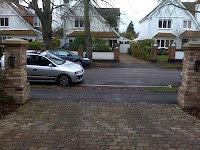 RAILWAY commuters are saving hundreds of pounds at Molesey’s expense by parking outside residents’ homes instead of the station car park.

Scores of cars are regularly being abandoned in Wolsey Road, Palace Road and other streets close to Hampton Court Station, from before 8am until around 7.30pm. This is causing householders considerable
difficulty getting out of their driveways and stops council vehicles from cleaning the gutters. 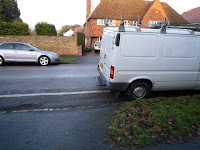 A concerned resident of Wolsey Road, told The Molesey News: “It is also impossible to see past these badly parked cars and therefore very dangerous when we pull out from our driveways. If you cannot drive out at an angle you ground parts of your car on the steep camber.”

She added: “Commuters fill part of our road between 1 Wolsey Road and 48 Wolsey Road before 7.30am every morning Monday to Friday.

They return at about 7.30 in the evenings. This is half the road taken up by people who do not contribute to our village.”

It is not hard to see why railway users prefer to park for free in Molesey’s residential streets. The cost of an annual season ticket for the station car park is £680, in addition to £1,640 for a standard class yearly season ticket to travel from Hampton Court Station into Central London. 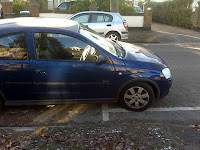 And travelling from Esher Station costs £200 more, at £1,852, providing added incentive for commuters who might otherwise use Esher to make the trip to Central London.

In 2009 some 150 households and Molesey businesses signed a petition calling on Surrey County Council to restrict parking in Wolsey and Palace roads for an hour and a half on weekday mornings.

This would have allowed anyone wishing to visit the shops to come and go during the day. The small number of householders without driveways could have been issued with a parking permit under the proposals.

The idea was supported by the Conservatives at a Local Committee meeting (a decision making body made up of county and Elmbridge borough councillors) but opposed by the Molesey Residents Association councillors, who wanted to keep the status quo.

Ultimately the idea failed to get off the ground because the SCC ended up proposing a 3pm to 4pm restriction which would have penalised parents collecting children from St Lawrence School at the Church Road end, and residents couldn’t support it. 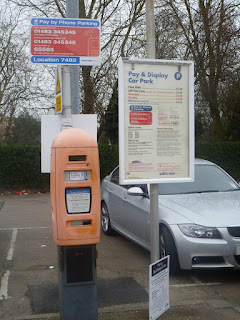 Steve Bax of the Molesey Conservative Residents, said: “East Molesey has been bedevilled by this problem for years. Apart from causing a daily inconvenience it also impacts on people’s enjoyment of their homes and streets. It becomes a quality of life issue.

“I think residents were on the right lines with their proposals, and I will be making it a campaign pledge at the upcoming election to support and assist them in getting this long standing problem resolved.”

With building due to take place on land around Hampton Court Station before June next year, the spaces at the car park could be unavailable and this will inevitably push commuter cars on to Molesey streets, making the situation worse if it is not urgently addressed.

What do you think? Email Steve at MoleseySteve@gmail.com or click on the headline to this article to leave your comments.

Steve Bax calls for action to save Molesey's antique streetlights 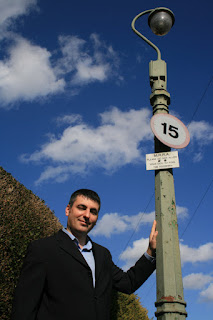 MOLESEY'S antique 20th Century streetlights are due to be ripped up and junked - unless urgent action is taken.

Many of our town's distinctive posts have been lost already, and replaced with modern designs by Surrey County Council's contractor Skanska, as part of a 25-year upgrade and maintenance contract.

The new designs offer improved white lights and mobile phone technology which allows them to be dimmed from a control centre in Guildford to save the county 60,000 tonnes of carbon and £12million.

But when conservation-minded residents and Molesey Conservatives called for the new lamp heads to be integrated with our existing posts, we were met with stiff resistance from county officers.

They said it was not technically feasible to keep the antique posts as they no longer comply with health and safety laws.

Steve Bax teamed up with a concerned resident and did some research on the internet. They discovered a near identical situation in the London Borough of Ealing from three years ago. On that occasion residents were successful in having their heritage posts integrated with modern technology, with the help of the Cast Iron Company (CIC) of Guildford.

Gary Young, of CIC, told The Molesey News that modern columns have a door in the base to allow the electrics to be worked on safely.

He added: "We came up with the idea of modifying the columns in Ealing by making a new cast iron base with a suitable door and backboard, and after modifying the old column this new base was then joined to the old one.

"Yes its more expensive but it works technically and these old modified cast iron columns will last a lot longer than their steel equivalents-probably 100 years plus! The problem with all these things is galvanising the political will to make it happen."

Mr Young is quoting £950 per post to upgrade them, which is substantially cheaper than the £3,000 to £4,000 which Surrey County Council claimed would be required to transport each column to the North of England for upgrading.

Our Molesey Residents Association elected councillors have been content to go along with the SCC plan and allow the posts to be lost. Their newsletter even enthused about being "able to see the stars again”.

Steve Bax said: "I say to our MRA councillors if you are serious about conservation in Molesey then it's time to prove it. CIC is prepared to meet with councillors and officers to discuss and offer its expertise. Let’s work together to get this upgrade option on the table before our grand old posts are gone for good."

What do you think? Email Steve at MoleseySteve@gmail.com or click on the headline of this article and scroll down to leave your comments

Owners of The Bell pub meet residents to discuss concerns 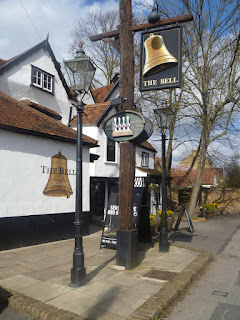 SPIRIT Group, the owners of The Bell pub in East Molesey, have had their plans to extend the historic building put in check by local residents.

It had applied to Elmbridge Council for permission to build a single storey, flat-roof extension at the rear of the pub, to include a service hatch, store room, porch and disabled toilet.

However residents in the vicinity of the Grade II listed pub in Bell Road submitted 11 letters of objection, raising concerns about increased traffic, a worsening of existing parking issues and long standing complaints about noise.

As a result the application was halted at Elmbridge Council earlier this month, to give Spirit Group three weeks to meet with residents and discuss concerns.

One Bell Road resident told The Molesey News: "The Bell is a much loved historic building and Spirit Group's belated interest in it's structural welfare is welcome. This Pub should be at the heart of the local community and working with close neighbours for a more harmonious relationship - certainly not exacerbating nuisance effects in pursuit of profits."

Another said: "Whilst I do not object to the proposed alterations, I feel that measures need to be introduced to protect the interests of those with homes in close proximity."

On Wednesday night (March 21) Spirit Group invited residents along to the pub to view its plans and to receive assurances from investment manager Victoria Rogers, who made the trip to Molesey from York.
She agreed to address local concerns and promised to improve the decor of the 600-year-old building.

MOLESEY Conservatives have called on the Environment Agency to make the riverside path safer at Hampton Court Bridge.

We have taken up the issue in response to residents living off Graburn Way, who wrote to express concern that the dirt track path is "pitted, uneven, and most of all extremely dangerous".

One described seeing a wheelchair user struggling to navigate the section, and added: "I had to help get the occupant out of the chair while their carer negotiated a particularly bad hollow in the surface.

"During the Olympics the towpath will presumably be crowded and there will probably be a nasty accident unless some restorative treatment is carried out now."

Spectators are expected to line the route of Olympic cycling events on July 28, 29 and August 1, when it crosses Hampton Court Bridge and passes along the Hurst Road in East Molesey.

The Molesey Conservative Residents contacted the Environment Agency, which is responsible for the path, and the EA agreed to carry out a site assessment in late March. We will let you know the results in the next Molesey News.


THE Elmbridge portion of your council tax bill has been frozen for another year, reflecting borough Conservatives' resolve to keep your bills as low as possible in difficult times.

It means that since the Conservatives formed the administration at Esher in 2006, there has been no increase in the council tax for five years out of six.

Elmbridge is one of only nine councils in England and Wales to have achieved this, and it is against a backdrop of 4% inflation and the council having to find £1.2 million in savings. And what’s more, there has been no reduction in the council’s services, and the charges for services EBC provides have been frozen again - for the fourth time in six years.

Over the life of the administration the Council has saved £6 million from its budget by renegotiating contracts, clamping down on waste and other measures. Elmbridge was recently praised by the District Auditor as among the country’s top performing authorities.

Council leader John O’Reilly, told The Molesey News: "The Council Tax freeze is particularly welcome for young families and those who rely on their pensions, where every penny matters.

"We are relentless in demanding value for money, but protecting our superb community and other services."

No garden for Jolly Boatman site?


THE developer which owns the derelict ‘Jolly Boatman’ site opposite Hampton Court, has yet to take up the Palace’s offer to landscape the area.

Gladedale, which plans to build a hotel on the land sometime before next year, was given a chance to have the site turned into a garden so that it could look its best during this summer’s Olympics - when three cycle races will pass by.

But The Molesey News understands the developer is considering other options, including to invite global TV crews to position themselves at the Boatman.

Molesey Conservative Residents candidate Steve Bax is to write to Gladedale to urge it to take up the Palace’s offer before it’s too late.

He said: “This developer stands to make a lot of money when it eventually builds its hotel, homes and retail complex around the station.

“The least Gladedale can do in the circumstances is to allow this site to be beautified in the short term, to give something back to the people of Molesey.”

Steve will pledge himself at the election to work with the developer and local residents, including the Hampton Court Rescue Campaign, to mitigate the effects of the scheme on Molesey. He will support any credible proposal to buy the land, so that it can become a permanent garden and compliment Hampton Court Palace.

He is also concerned about what will happen when the 240 space station car park is built on as part of Gladedale and Network Rail’s hotel, homes and retail scheme.