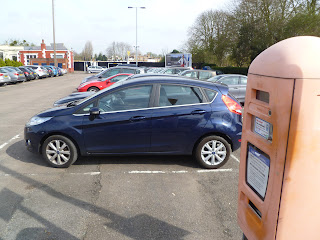 Residential streets in East Molesey could be swamped by even more commuter cars than are currently there if development at the Jolly Boatman site goes ahead.

People already use Wolsey Road, Palace Road and surrounding streets as a free alternative to the expensive station car park, with roads filling with cars from 7am until 8pm and causing all sorts of difficulty and danger for residents trying to exit their drives.

Steve Bax is concerned that if the developer Gladedale and its partner Network Rail are able to start building a hotel, care home, flats and retail scheme on land around the station (including the Jolly Boatman site) this will result in the station car park being closed for many months, and it is less than clear whether railway users will have any alternative parking. If none are provided they will have no option but to spill out on to East Molesey streets making a bad situation a great deal worse.

Steve has been pressing Network Rail to say how it will accommodate its customers and eventually received a statement from the Network Rail and South West Trains Alliance, which was less than illuminating.

It said: “Whenever improvement work takes place on the railway, everything is done to minimise the disruption this causes passengers and local communities. As part of our plans to develop Hampton Court station, we will continue to work closely with the developer and local authorities so this approach continues and will provide information to passengers and the local community as soon as we are able to.”

Steve said: “Gladedale and Network received planning permission for their scheme 2008, regrettably in my opinion. But having had had four years to prepare, the railway is still unable to say whether or how it will provide parking during the construction - I find this astonishing. People will understandably wonder if there is a plan or if Molesey’s residential streets are being expected to take the place of the station car park.”

Before the development can go ahead, Gladedale has to satisfy Elmbridge Council that it has met 56 planning conditions, and if it is unable to commence building by June 16th then its planning permission expires. It will need to win an appeal against the council's rejection of its travel plan, which will be held on May 8th.

However the crucial thing is for Molesey to get its defences in place to safeguard against this commuter car onslaught. Steve advocates a 1-2 hour parking restriction in vulnerable streets, so that for a short time in the middle of the day (and only on weekdays) parking will be banned without a permit. Residents with drives would be able to use them and would not be affected, but all day commuters would be deterred. This would declutter roads and give a boost to local shops in Bridge Road, because potential customers would be able to park (likely for short periods of time) in Wolsey and Palace Road - something that is impossible at present due to the commuters, who are contributing nothing to the area.

The Molesey Residents Association opposes the solution put forward by Steve and the residents, and would be happy to stand by and allow the misery in these streets to continue. It holds 11 council seats yet will not take action when residents call for help. The argument put forward in the MRA's summer newsletter last year was that protection for Wolsey and Palace would only move the problem to other roads. There may be some truth in this, but common sense tells you that there are limits to amount of distance from the car park and extra journey time that commuters are prepared to accept, before they give up and go elsewhere.

Should the scheme go ahead and the car park close, streets that are not currently affected by the commuter issue could well be engulfed. It is better that East Molesey has a councillor who is prepared to take action and not stand by and allow problems to continue unchallenged. Our next Surrey County councillor will have a seat on the decision-making Local Committee which has the power to implement parking restrictions of the kind mentioned above, and Steve would call on the support of Conservative colleagues on the committee to address this situation.

One other solution would be for railway users to park in some of the empty bays at the Molesey town centre car park, thereby addressing the under use there. Perhaps Network Rail would be good enough to provide a shuttle bus for rush hours.

Canvassing at the station with Dominic Raab 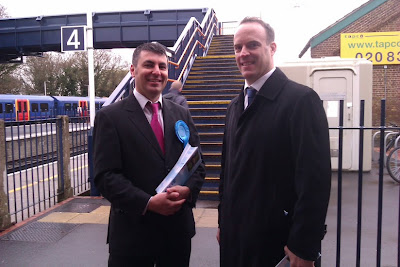 Here's a photo of me at Esher Station with local MP Dominic Raab in between the showers on Friday. It was a very productive morning and I had the pleasure of meeting many voters and hopefully picking up some support. I suspect this election will be close and every vote will count.
Posted by Steve Bax at 13:34 No comments:

Meeting to discuss safety and congestion at the new Cranmere School 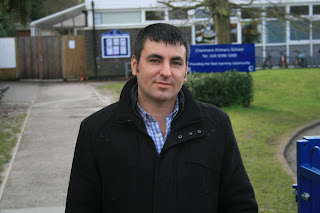 JUST got back from the public meeting at Cranmere School to discuss the traffic concerns when the school moves to Arran Way in Esher and undergoes expansion.

I would say the meeting was both constructive and frustrating - constructive because it allowed parents and residents a chance to hear about the safety and congestion issues that will result when the school entrance is switched to an area where parking is already severely limited, and HGV lorries pass through - and  frustrating as it was clear to all present that Surrey's proposed solutions are woefully inadequate.

Surrey will provide 37 staff parking spaces at the new school, but has refused to consider a parent drop off zone on site. Instead it proposes to create 80 parking spaces along the railway embankment in Douglas Road. My concerns about this - and which I raised at the meeting - would be that the 1.6metre bays will not be wide enough for children to climb out of cars on the safe side. Realistically parents will have to get them out at the roadside and put the children and themselves at risk from all of the passing traffic.

A better solution, I believe would be to carve out additional bays on the other side of the road, where residents already park on the verges. Some diagonal parking or modest inlets would be a big help - they wouldn't solve the problem completely, but they would alleviate to some degree, and would potentially resolve the parking on verges issues that residents face in any event.

I would like to see some additional parking bays created in Blair Avenue and Arran Way, and would - if elected - seek to use some of the community projects budget allocated to county councillors to provide equipment and disposal for members of the Lower Green community to come together and clear the entrance to the school footpath in Blair Avenue that has become overgrown with brambles and has rubbish and alcohol containers dumped in it.
Posted by Steve Bax at 15:02 No comments: 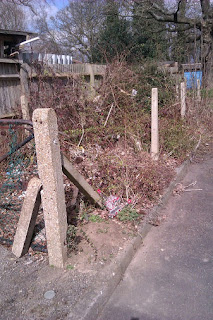 So lovely to see the sun out at last. I have been delivering manifestos in the Esher Road and Bridge Road parts of Molesey and door knocking in Beauchamp Road. Nice to see some familiar faces there and the support has been generally very good.

At Blair Avenue in Lower Green part of the ward recently, I enjoyed speaking to residents and finding out about pigeon fancying (of all things!) but actually fascinating. I had a closer look at the pedestrian access to Cranmere School which is being reopened. Many of the residents have been helping to clear the alley and I commend their community spirit. There are still some pockets of blight though, where less considerate individuals have dumped rubbish over the fence by the garages, and part of the pedestrian entrance itself (pictured here) is full of undergrowth, general debris and alcohol bottles.

I am told the area often attracts young drinkers and I will discuss with the neighbourhood police team to take steps against any antisocial behaviour. I will shortly be meeting with representatives of Lower Green community centre and will raise the possibility of a community effort to clear and tidy this area.
Posted by Steve Bax at 01:01 No comments:

My response to an RA article on parking charges

I have been mentioned by name on the Molesey Residents Association website! This is a new move for the MRA which usually prefers to deny its opponents the 'oxygen of publicity', but the temptation to score a political point appears may have been too great to resist.
http://moleseyresidentsassociation.org.uk/news/car-parking-charges-update/

It is in connection with Elmbridge putting up parking charges in April and my manifesto last year in which I said I would try to argue for free parking to be restored in Molesey town centre if elected. I still think there is a good case to be made because the car park makes an annual loss as many residents choose to park in residential streets, whereas on days when there are no charges the car park is full. Free parking could help congestion and perhaps the businesses too, but the difficulty is that the borough council has to pay a tax to the Government for every bay it operates, whether a car park is free or not, and without income this overhead would have to be met from our council taxes (plus of course the costs of lighting and maintenance - enforcement currently pays for itself). As budgets get tighter the revenues from car parks (around £1million a year) are becoming more and more vital for funding the council's non statutory services like meals on wheels.

So I have to be honest and say that the prospects of restoring free parking don't look too promising in the immediate future but I will continue to look for opportunities to make the case. I posted a comment along these lines on the MRA webpage on March 22 but it has still to be approved (as of April 21) so I've copy n pasted my response here.


I want to correct some misinformation above if I may. You have a direct quotation from me above saying “Free parking for our town centre!”. This is not what I said. The pledge in my manifesto of last year was actually to “Lobby Elmbridge Council to restore free parking at the Walton Road car park” and this is an important distinction.
Obviously it is not in the power of any individual to repeal parking charges, that requires a majority view at council. My promise to the people of Molesey East was no more, no less, than to try to persuade the Conservative group to introduce free parking at Walton Road. This is precisely what I would have done had I been elected.
It is disingenuous of the MRA to try to claim in its recent newsletter and to some extent here, that the Conservatives promised free parking in last year’s election and then cynically put up charges. The Conservative group hasn’t shifted its position in support of parking charges: it remains in favour as this helps to cover the cost of running and maintaining them.
My view as a local candidate may sometimes differ from the group – it’s called being my own man.
Posted by Steve Bax at 00:38 No comments: