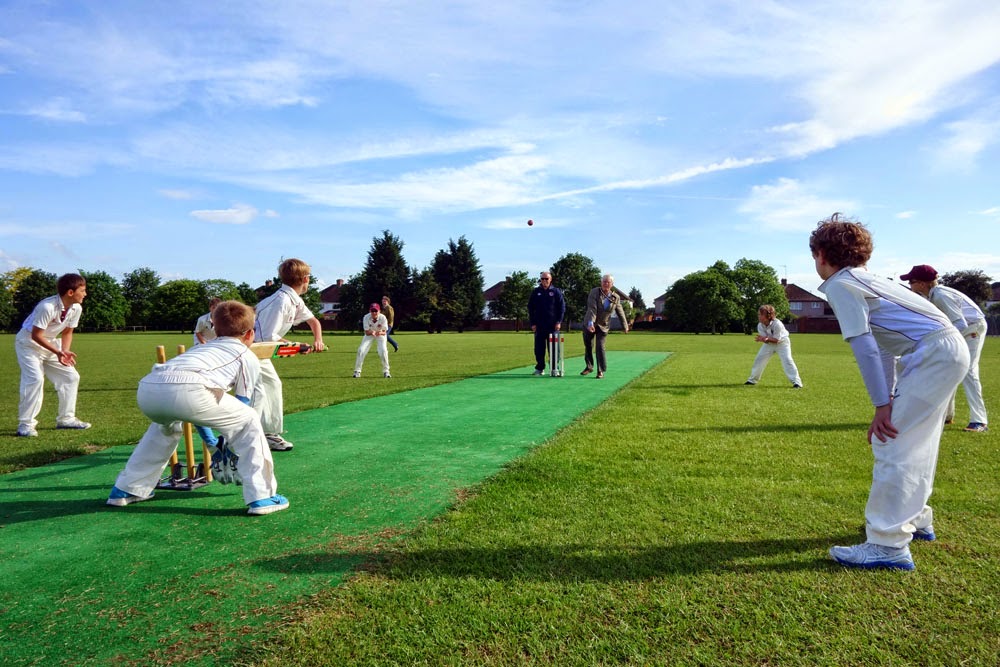 CRICKET pitches have been ‘reintroduced’ to Molesey Hurst Recreation Ground to replace those that were lost years ago.
A square of seven turf strips and one artificial strip were in- stalled at the rec behind Hurst Pool in June by Elmbridge Borough Council. The grass wickets will ready in 2015 once the fine turf has fully established itself, but the artificial strip is already in use (pictured are the East Molesey Cricket Club Colts training on it with Councillor Barry Fairbank, the Mayor of Elmbridge).
The Council says the artificial strip provides “realistic bounce and spin, enabling youth cricket to be played in all weathers”. It should come in handy for East Molesey Cricket Club which has been seeking new facilities for its Colts aged 5–17, and wishes to expand girls and disabled cricket provision. It can also be hired by non clubs for £25.
The Molesey Conservative Residents often hear it said on doorsteps that there is not enough for young people to do in Molesey so we welcome the new facilities. The £28,150 price tag sounded surprisingly high to us, but on comparing prices online we discovered a new cricket strip can be anything from £3,000 to £7,000 with install and ground preparation! Nothing is cheap these days it seems.
Additionally councillor Steve Bax recently had a chance to inspect plans for a new children’s play park in East Molesey. The play area will include a trim trail and various climbing frames, and will be created on land at Barge Walk off Graburn Way, and adjacent to Molesey Boat Club. It will be a replacement for the very basic existing children’s park which is being removed to make way for the boat club’s proposed indoor rowing tank. The new equipment and install is expected to cost £60,000 with 10% of the money coming from the boat club.
Elmbridge placed the order in June and is hopeful of the facilities being open during the summer school holidays. There will be a chain link fence and picnic benches. While an existing shelter is being removed.
Posted by Steve Bax at 14:59 No comments: 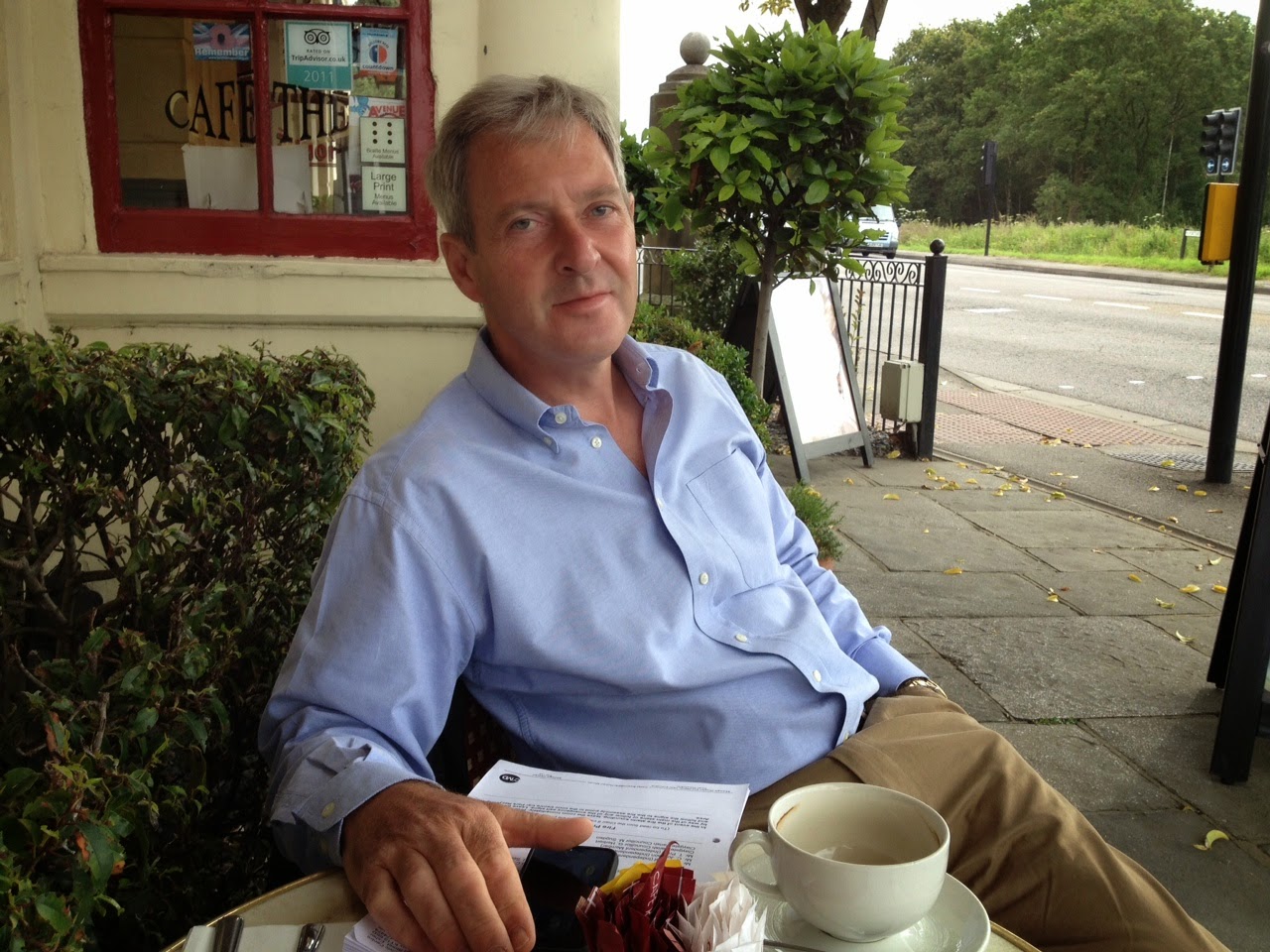 Elmbridge Council has set an ambitious goal of becoming ‘self-funding’ and free from its dependence on the ever shrinking Government maintenance grant within six years.
Tim Oliver, Cabinet member for Resources in the borough’s Conservative administration, is driving forward a strategy of property in- vestments that will give the borough a stable income in the near future.
He told our newsletter The Molesey News that the grant Elmbridge receives from Central Government to run services has diminished by 50% in the last four years, and will continue to go down.The council has successfully reduced its spending by £8million since the current administration took office in 2006, without impacting frontline services. But making efficiencies is only part of the solution and the council also needs to find new sources of income.
Cllr Oliver (pictured) said: “We have set the goal of financial in- dependence from the Government grant by 2020. All local authorities want to be in that position but for most it is not realistic. Elmbridge is one of the few councils where that is achievable, because of the decisions we’ve taken.” Elmbridge receives a ‘New Homes Bonus’ stream of money from the Government, which the council has used to build its reserves by around three to four million each year.
Cllr Oliver added: “This has allowed us to invest around £13million so far in ‘local as- sets’, for example we purchased a row of shops in Cobham. Our investment crite- ria is that it has to be in the borough and make a minimum annual return for the taxpayer of 6%.”
As Resources portfolio holder Cllr Oliver oversees Elmbridge’s legal department, IT, finances and asset management. He is married to Debi, a GP, and has three children. Though now a borough councillor for Esher, he was formerly East Molesey’s county councillor from 2005 until 2009.
Cllr Oliver, 54, brings a wealth of experience from the world of busi- ness to the council. In 2000, the year he was first elected,  he launched his legal services company, Prabis, and grew it from a turnover of £2million to just under £200million this year. It employs 2,500 people. Whilst doing that Cllr Oliver was also chairman of the Shooting Star Children’s Hospice for a number of years and oversaw its merger with Chase in Guildford. He is now deputy chairman of his company, a less hands-on role which allows him more time to spend on council work.
Cllr Oliver said: “Local government isn’t just about emptying the wheelie bins. Elmbridge can be a top borough to live in. We’ve got the environment and the quality of life and it’s up to the council to see how we can add to that.”
Posted by Steve Bax at 14:55 No comments:

Molesey councillors to decide on Boat Club application for funds

The first formal meeting of the Local Spending Board for East and West Molesey will be held this Thursday (September 11th) at the Council offices in Esher.
It will meet to consider applications from local good causes for a share of Community Infrastructure Levy (CIL) money. This is a tax that Elmbridge Council levies on developers who are building in the borough, to ensure that development pays towards local improvements.
The spending board is comprised of Molesey's nine Elmbridge Borough councillors, among them our very own Councillor Steve Bax, and will debate requests for funds from three applicants - Molesey Boat Club, the Thames Project and St Paul's Church.
At the last 'informal' hearing earlier in the summer, members provisionally agreed to allocate £40,000 to Molesey Boat Club to help towards the creation of an indoor rowing centre in Graburn Way. This would be a replacement for the tank that was lost when Elmbridge's old leisure centre was demolished in 2004 and replaced with the Xcel Centre at Walton.
Bill Raspin, Chairman of the Boat Club, said: “The rowing tank will be available for the whole community to use and will en- able us to provide a safe and stable environment for both able bodied and disabled people including schools and clubs to try out rowing and gain confidence before going onto the water.”
The facility will cost close to £300k and will be mainly covered by fundraising and donations. The club has asked Molesey councillors for £80,000 but as there is only £81,000 in the pot currently (that was the figure in June - it may have increased) it is likely to be offered around half.
A separate bid from the Thames Landscape Strategy seeks to enhance the entrance to Hurst Park from Barge Walk at a cost of £5,700. While St Paul's Church in East Molesey is seeking £10,000 to cover unexpected costs that have arisen from essential repairs being carried out to its spire.
Elmbridge's Conservative run council is leading the way as the first local authority to charge CIL, which is a more local version of the previous Section 106. The Council charges developers £125 per square metre, and £100 psm for a retail development.
CIL bids can be made by going to www.elmbridge. gov.uk/planning
Posted by Steve Bax at 14:50 No comments: