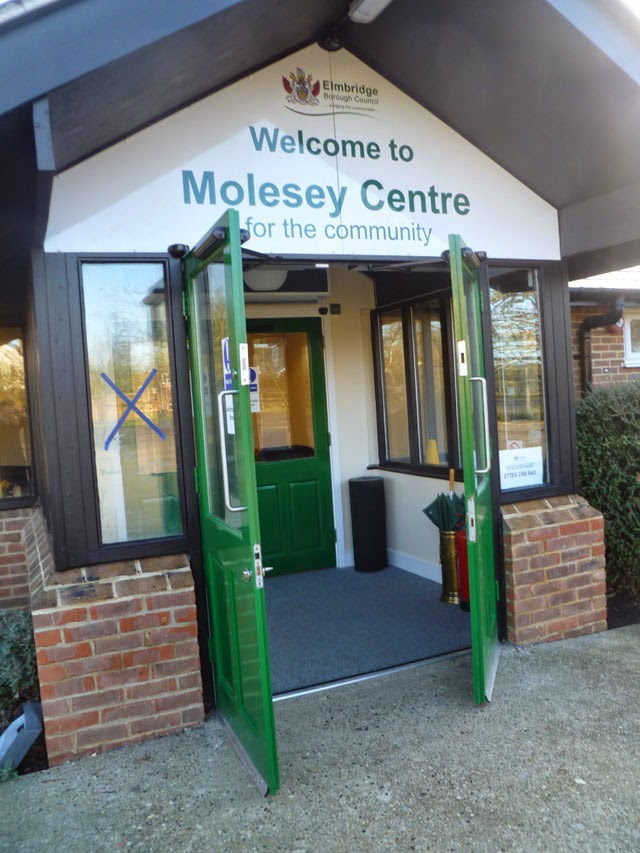 MOLESEY’S older residents have been giving their approval to the new look Mole Hall, which reopened in February following major renovation work.
The centre in Bishop Fox Way, West Molesey, has been transformed at a cost of £400,000 to combine a hall space with the features of the old Molesey Day Centre; it now has a large dining area and canteen, kitchen space for the borough’s meals on wheels service, a hair salon and offices.
Guests are greeted by automatic doors, and inside there are moveable partitions which allows the floor space to be customised for hirers.
Manager Jane Pritchard said: “Our users really like it. For our first special lunch we were able to make the dining area L-shaped and get an extra 20 people in.”
I accompanied councillors Jan Fuller and Christine Elmer, who oversaw the project at Elmbridge Council, during their visit to the centre. They confirmed their satisfaction on inspecting its new facilities, saying that Molesey now has a first rate facility that will serve it for years. 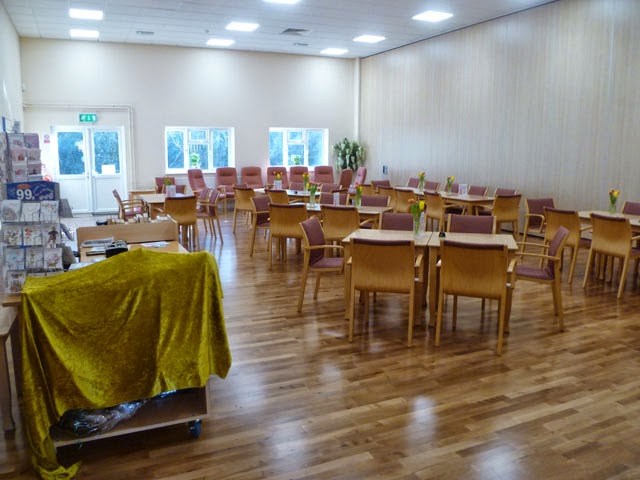 The Molesey Conservative Residents welcome this substantial investment in our town’s community facilities and resources, it’s something we need much more of.
Renovations have included installing a suspended ceiling throughout and additional windows to increase the natural light. The floor was replaced, a new mobile stage purchased, and the moveable partitions installed. An outdoor storage facility will be added later.
The decision to merge Mole Hall and the Molesey Centre on the one site was controversial, but is a win-win situation for Molesey. The old day centre in School Road, East Molesey, was cramped and dated, and the land was due to be sold for affordable housing - together with the adjacent Radnor House in Hansler Grove. At the same time Mole Hall, under DC Leisure, was being hired only 27% of the time, putting its long time viability at risk. 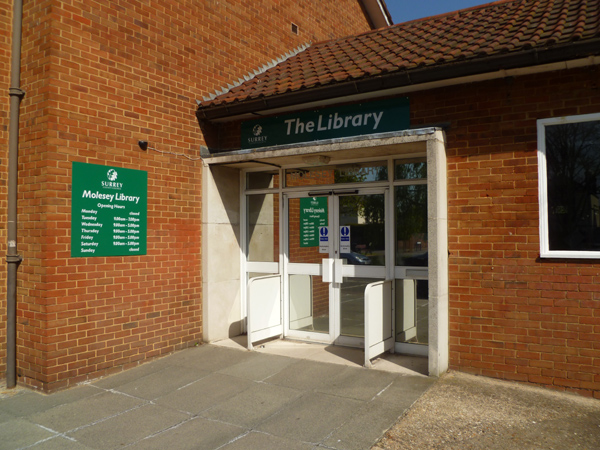 THREE years ago Library was one of 11 Surrey libraries threatened with closure by the county council due to low footfall.
It was granted a reprieve, mostly due to the distance between the next available branches - either the big library in Walton or Dittons library - and happily the whole misguided idea of closing and relaunching libraries as community run enterprises was quietly, ahem, shelved.
One good thing that came out of the episode however, was that the Molesey community was reminded of how much it - and we - all value our library and how much the poorer we would be if we lost it. This is a fantastic local resource providing books free of charge to expand our learning and bring us enjoyment.
I am a regular library goer, although admittedly these days most of the books I borrow are children's stories that I read to my two boys at bedtime. When I get to read a book for myself, which isn't as often as I would like, I am reminded what a simple pleasure this is. More people should make time for it.
A lot has been done to improve Molesey Library. Surrey has weeded out less popular stock and improved the floorplan so its now more spacious and inviting. Innovations like the ‘Molesey Library recommends’ book stand, and children's rhyme time session, or computer classes for the elderly have all started to pay off.
The Friends of Molesey Library, which was formed to try to preserve our local library, has raised funds for purchases like signage and furniture, it held a Love Your Library Day in summer 2013 to bring people in and holds regular Friday coffee and cake mornings that are very popular with visitors. 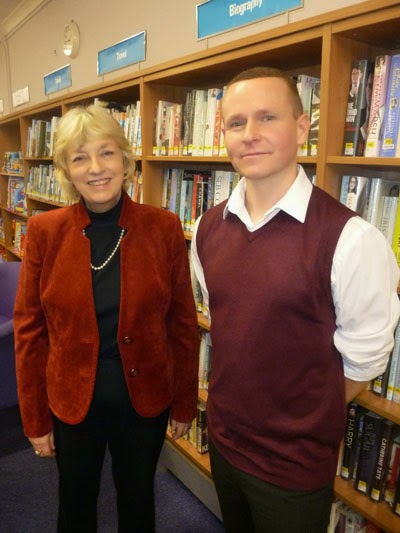 Liam Dixon, the buyer for the Surrey Library Service (pictured left with Pauline Morozgalska of the Friends of Molesey Library), was the guest speaker at the Friends of Molesey Library’s annual general in January. He said on that occasion that 1,448 more books were issued in 2013 than the previous year, which was a 2.5% growth. This was on the back of 10% more visitors in December.
In January this year 723 more books were issued than the same time last year, and this is significant because issues are the yard stick with which libraries' success or failure is measured.
Molesey Conservatives support our local library and want it to prosper. We will give political support where and whenever necessary but all of us have to do our bit too by continuing to use the library and to take out books and in doing so we will be enriching our own experiences but also helping this valuable local service to remain in our community.
Posted by Steve Bax at 13:26 No comments:

Molesey dodged a bullet over the floods, but lessons must be learned

I had an interesting conversation with a gentleman from Wolsey Road this week, regarding Molesey's close shave with flooding earlier in the year. His point was that the Environment Agency had predicted flood waters levels way in excess of where they actually rose, and that the insurance companies would base premiums on EA projections - if so residents of East Molesey, Thames Ditton and Walton might face rising home insurance bills.

This was an article I wrote in the Spring Molesey News on flooding and my suggestions of some practical steps Elmbridge Council might take to be better prepared in future.

MOLESEY'S flood defences were severely tested following three months of near constant heavy rain.
As the Thames burst its banks at Sadlers Ride and Hurst Meadow, the river engineering works at Molember Road thankfully held up to the challenge from the Mole and Ember, to the relief of those in homes adjacent to those rivers.
However I spoke with householders in Riverbank, and Hurst Road and Feltham Avenue who had endured the misery of dirty water and sewage in their basements, homes and gardens - a small number were forced to evacuate.
The Met Office calculated that some parts of the South East received as much as five months of rain in the period of mid December until the end of January.
Council responce
Elmbridge Borough Council (EBC) worked with Thames Water and the Environment Agency during the crisis, to monitor river levels, issue advice and check on the vulnerable. The council opened a 24 hour rest centre at Walton for evacuees and distributed some 8,500 sandbags and sacks. It also provided Portaloos for home with unusable toilets.
Robert Moran, Chief Executive of the council, said: “For the most part, residential and business properties in Molesey did not suffer river flooding on this occasion. Damage was reported from some residential properties in Feltham Avenue, Riverbank, Hurst Road and Molember Road (two properties) as a result of groundwater flooding and the backing up of the sewer system - which is the responsibility of Thames Water and where technical expertise is required.”
Mr Moran said vulnerable residents in East and West Molesey had received a “very good service and regular information and practical support” throughout the flood period. The council had also assisted in the clean-up and established a hardship fund.
This was at odds with the experiences of some residents I spoke to, who complained of a lack of timely information and being ‘passed from pillar to post’ by the various agencies as water invaded their homes. Others said sandbags, when they did arrive, came without warning and were quickly snapped up, apparently not always reaching those householders in the greatest need.
Elmbridge and its partners worked tirelessly to help residents over a wide area during the recent crisis and their efforts are to be applauded.
However it is clear that the various authorities can learn lessons from what went wrong this time in order to improve their response if the events of this winter are repeated in future.
One measure the Molesey Conservative Residents are proposing at the borough council elections in May, is to establish a flood warden for every at-risk Molesey street.
They can liaise with residents and the various authorities to ensure that information, sandbags and all other practical help can be targeted to the most vulnerable.
Posted by Steve Bax at 13:00 No comments: