Steve Bax is deputy chairman of the Molesey Conservatives and a former West Molesey resident of 8 years. He was a Molesey councillor from 2014-16. 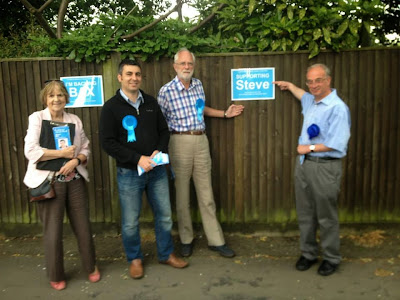 Steve is 42 and is married to Kim, who runs a children's playgroup in West Molesey. They have three young sons. He was a local reporter and editor in Surrey and London for a number of years.


As a press man, Steve gained a good insight into the workings of local councils and local politics, and was in regular contact with residents who were seeking redress for community issues such as schools and housing, the environment, planning, crime and everything else that comes under the 'quality of life' umbrella. He led campaigns for the Herald and its sister paper the Hounslow Chronicle to save three schools from closure (saving two) and helped others in small and large ways.

Steve enjoyed political reporting and was interested in getting actively involved rather than continue to be the impartial observer. As a resident of West Molesey in 2011, he was invited to represent the Conservatives at the Elmbridge Borough Council elections that year. Steve campaigned energetically and polled 26% of the vote on his first outing. Encouraged, he continued to campaign throughout the next year and launched The Molesey News - with permission and funding from the Esher & Walton Conservatives - as a means of campaigning on local issues in Molesey. He improved his standing dramatically at the 2012 elections, taking 43% of the votes and reducing the Molesey Residents Association majority by 800, though losing to MRA chairman Nigel Cooper by 107 votes.

Steve contested the East Molesey & Esher county council seat in 2013, narrowly missing out on victory by 24 votes. But in 2014 he was elected by the voters of East Molesey, defeating incumbent MRA councillor Tony Popham by 118 votes. On joining the council Steve served on the North Area Planning Sub Committee, the Local Committee (a Surrey county committee focusing on roads, schools, youth services) and Overview & Scrutiny Committee. Steve was the council's representative on the Heathrow Noise Forum and Chairman of the Council's Heathrow Task Group. He is also deputy chairman of the Friends of Molesey Library and treasurer of Henrietta Playgroup in Molesey.
He always enjoys hearing the views of residents and promises to reply to all correspondence. This helps form his opinions on policy. Email MoleseySteve@gmail.com or follow Steve on Twitter @MoleseySteve