Molesey Hospital saved - but what happens next? 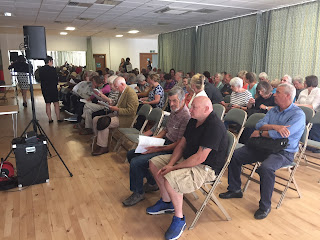 I am very pleased to confirm that Molesey Hospital has been saved from closure, following a meeting by local NHS decision makers in Leatherhead on Friday afternoon. Former Molesey councillor Peter Szanto and I attended for the Conservatives along with MRA members and concerned residents, many of whom turned up with placards and banners showing support for the hospital.

Surrey Downs Clinical Commissioning Group (CCG) held a public consultation on four options it was looking at to change how and where it will provide services in future. Two of those options involved the closure of Molesey's 120-year-old hospital and the transferral of its 12 beds to Cobham Hospital, which we had argued all along was impractical due to the poor public transport links, and undesirable given that the population of Molesey is greater than in Cobham. It makes better sense to site a community hospital in the area of the most potential patients, right?

The GP-led CCG voted unanimously for 'option 2' which concentrates changes in Epsom and Ewell area and grants Molesey a reprieve. Everyone was delighted! James Blythe, director of commissioning and strategy for the CCG, called the consultation process "robust" and called the responses from Molesey "significant". He went on to say that it was desirable to have bed based units in key areas of the Surrey Downs patch, including in North Elmbridge.

However he went on to characterise Molesey Hospital as having "significant physical challenges", ie in need of repair and they would "absolutely retain services but we would look at what sort of building and where". So clearly there are still a number of unknowns going forward, principally what will become of the current Molesey Hospital building? Reading between the lines it sounds like Mr Blythe and his colleagues feel that a modern facility is required, but will this be built on the current site or will the existing estate be sold or part sold to pay for a new hospital on another site, if so where?

So overall great news and all credit to the fantastic Molesey community who have really got behind the cause of the hospital. But all of us - residents and local politicians - need to keep a close eye on how things develop going forwards.
Posted by Steve Bax at 15:30 No comments:

THE governing body of Surrey Downs Clinical Commissioning Group (CCG) meets next Friday to decide whether or not to close Molesey Hospital.
The crunchtime meeting will be held in open public, at Leatherhead Leisure Centre in Guildford Road, KT22 9BL, from 1pm. We encourage you to go along and join us in showing support for keeping Molesey Hospital open.
Why is closure even being considered? The CCG came into being in 2013 and decided to undertake a review into how services will be provided across the five community hospitals it runs. This review included a 14-week public consultation with events across the CCG catchment area including one at Mole Hall (pictured) which was well attended.
Should Molesey Hospital close then its 12 hospital beds would transfer to Cobham Hospital, which is a newer facility but poorly very served by public transport. We estimate it would take an hour from West Molesey to Cobham by bus and about £30 return by taxi. As well as the beds, the outpatient services would also be "relocated" to the community. This is incredibly worrying giving the strain on existing GP surgeries in Molesey such as Glenlyn.
James Blythe, Director of Commissioning and Strategy at Surrey Downs CCG admitted that NHS Property Services could sell the hospital site if it were found to be surplus to requirements.
Click here for our interview with the CCG's James Blythe.
Posted by Steve Bax at 15:04 No comments:

Will Molesey RA councillors listen to residents over parking?

MORE than 350 East Molesey households and 52 retailers backed the Molesey Conservative petitions for parking controls earlier this year.
We have been calling on Surrey County Council (SCC) to introduce a weekday morning one hour period of residents only parking in Wolsey Road, Palace Road and other streets in the vicinity of Hampton Court Station.
This would encourage rail commuters to use the near-empty station car park instead of blocking the spaces in East Molesey residential streets. It would stop drivers hurtling dangerously around these streets looking for spaces, improve safety for people exiting driveways and would benefit Bridge Road retailers by creating parking capacity during the day for shoppers.
The petitions and supporting evidence were submitted by former Molesey councillor Peter Szanto and will be considered as part of the County Council's review of parking in Molesey.
Peter and colleague Steve Bax have respectively campaigned on the issue of commuter parking in streets close to Hampton Court Station and had intended to steer it to a successful conclusion if they had been elected in May. But now it will be for Molesey's Residents Association councillors to help bring about changes or stand in change's way.
Peter is sceptical given their past opposition, and said: “The RA councillors have opposed any parking controls. The question being asked now is whether they will listen to their constituents this time, in light of the safety concerns and supporting local businesses.
“We petitioned over 430 households and received support from well over 80%. Out of 59 traders and retailers 88% were supportive, so there is clearly strong local support for these measured proposals."
If the petitions are deemed by Surrey CC as worthy of acting upon, they would form part of a range of proposals to be debated by Borough and County Councillors at the Elmbridge Local Committee on October 3rd.
Posted by Steve Bax at 14:35 1 comment:

Green light given to new secondary school for Molesey and Walton

Shortly before he stepped down as Prime Minister, David Cameron gave the go ahead for 31 new free schools - including one for the Molesey and Walton areas.
ElmWey Learning Trust, who run Heathside School in Weybridge, submitted a bid to the Government for funding to open a free school by September 2019. Their business plan was accepted and the next stage is to find a suitable location for the school of up to 900 students aged 11-16.
This could be in either Molesey or Walton but the fact the new school will be called Heathside Walton-on-Thames rather suggests that Walton is the preferred choice. So far the shortlist (if there is one) has yet to be made public.
We do know that the new school will be able to call on existing expertise at Heathside Weybridge, it's sister school, which is rated Good by Ofsted and Outstanding for leadership. Conservative MP for Esher & Walton, Dominic Raab, is also supportive and has promised to work with ElmWey and Surrey County Council to help the new school get established.
Molesey Conservatives' Steve Bax has been outspoken about the need for a new secondary school and welcomed the recent announcement: “This is great news for Molesey," he said. "Few things matter more than giving children the best start in life and a good quality education. I hope a suitable site can be found soon and we'll be keen to see if we can help.”
Posted by Steve Bax at 14:28 No comments: 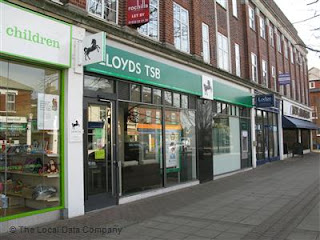 Lloyds bank is pulling out of Molesey on Monday (July 25) when its branch in Walton Road is due to close.
The decision to quit is being blamed on a lack of footfall with the ridiculously low figure of "28 personal and business customers" said to be visiting the branch each week, now that that the majority of transactions are now carried out over the internet and smartphones.
Lloyds said branch visits had declined by 19% reduction since last year as 73% of East Molesey based non-business customers use other branches or the internet.
We discussed the situation with David Jupp, chairman of Molesey Business Network (MBA), who is worried that the bank's demise w
ill have a detrimental effect on the town centre.
He said: “When Tesco built the Hurst Park store I predicted then that it would be the first nail in the coffin of the shops along the Walton Road.
"When Barclays in West Molesey closed about 2 years ago, at that time questions were asked of Lloyds if closure was planned. When Saturday opening was suspended last year I again asked if this was a prelude to closure and again a negative was received. However, I now disbelieve the statements that were provided to MP Dominic Raab as I feel plans were in place some time ago.
The statement we received from Lloyds Bank reads: "The East Molesey branch will close on 25th July. We have made the difficult decision to close this branch because of the changing way customers choose to bank with us, which has resulted in customers using it less often.
"The way customers fulfil their banking needs is continuing to change and we have seen a significant decline in customers using this branch.
"Customers can continue to use any other branches in our network, such as Walton on Thames branch, and the local post office is a short distance away where customers can manage their day-to-day banking needs. We apologise for any inconvenience this may cause customers.”