Year of disruption as Esher Road bridge is replaced 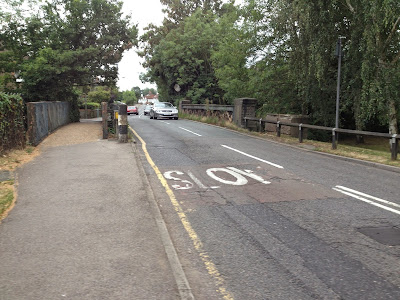 AFTER 120 years of service the Victorian bridge over the River Mole at Esher Road is ‘nearing the end of its working life’ and must be shortly replaced.
The 'Elmbridge Local Committee', which consists of the borough's eight county councillors and eight borough councillors - among them Molesey's Steve Bax - endorsed the project in February, and now Surrey officers are drawing up designs, costings and a timescale for the estimated £1million project.
Construction could start in 2017 and is likely to last a year with the bridge access closed for most of that time. Clearly the demolition of this well used but corroded bridge, and the installation of a new one, will cause massive disruption as traffic is redirected via Hampton Court Way.
Molesey Conservatives have raised with the County officers the need to minimise the impact on road users, however we are optimistic that a new bridge will bring desirable and needed improvements to the road layout.
Cllr Bax said: “Residents have repeatedly raised safety issues about excess speeding, the lack of a crossing and the narrow footpath on the east side that is well used by Orchard School children.
“In the council chamber last year I suggested we ought to look into extending the footpath on the west side from Alders Grove to Walton Road to reduce the need to cross. Happily I’m told that the new bridge can accommodate this and create a wider road and pavements.
“We must also seize the opportunity to improve the dangerous access/exit to Molember Road, which has long been a problem.”
Posted by Steve Bax at 13:42 No comments:

Missing barrier in Hurst Road is a danger for pedestrians 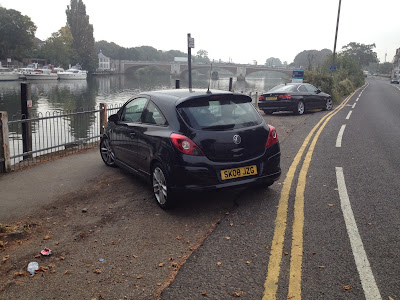 MOLESEY Conservatives have secured an important victory for public safety locally.
Thanks to pressure from our chairman, Mr Terence Alexander, and Councillor Steve Bax, Surrey County Council has agreed to replace the broken barrier by the war memorial in East Molesey.
Presently around 50m of barrier is missing and cars are regularly parking across the pavement area, with pedestrians as well as mums with buggies being forced into the road.
Despite this being an obvious accident waiting to happen, there appeared to be little urgency from the authorities to do anything about it. Surrey tried to pass the buck to Elmbridge and vice versa.
Terence, who lives along the riverside in East Molesey, refused to let the matter drop and enlisted the help of Steve.
Eventually Elmbridge officers uncovered years-old documentary proof that the area had been designated as highway land in 1887 and that Surrey was liable for repairs.
Steve has since had confirmation that the County is obtaining quotes from contractors with a view to replacing 50m of fence line by this month (May).
Steve said: “The safety of our residents and children and that of visitors to the riverside cannot be overstated. I am pleased the County has decided to act, and not a moment too soon! All credit is due to Terence for his perseverance.”
Posted by Steve Bax at 13:14 No comments:

Elmbridge Council is partnering with the Paragon housing group to develop a number of new affordable homes at the Radnor and Sandra House sites in Hansler Grove, East Molesey, and the former Molesey Centre in School Road. Cllr Steve Bax understands that a planning application is currently being tweaked by Paragon in order to address concerns raised by residents following the public exhibition late last year, and will be submitted in the next few weeks.

Here is our article from The Molesey News in March: 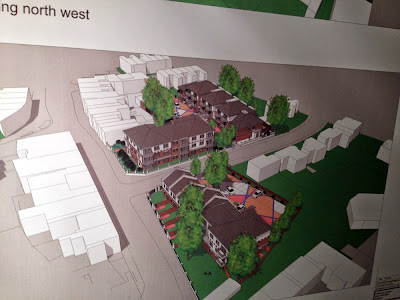 SOCIAL housing provider Paragon has unveiled plans for a comprehensive redevelopment of the Radnor House and Sandra House sites in Hansler Grove, East Molesey.
It intends to build a trio of three-storey blocks of affordable housing for families to help meet a demand in Molesey and the borough.
But in doing so it must knock down not only Radnor House - a former elderly person’s home, now laying empty - and the adjacent old Molesey day centre, it will also demolish Sandra House which is still in use and home to key workers and their families.
Paragon displayed its plans at an open evening at Radnor House in December and invited residents to give their feedback.
Molesey councillor Steve Bax attended a meeting with Paragon’s business director Chris Whelan in the Autumn to discuss the proposals which were then in an earlier stage.
Steve raised concerns about height and mass of the proposed buildings and also about the ill-advised decision to make a road access in the narrow and heavily congested School Road.
He had further discussions with Elmbridge’s Cabinet member for Housing, Councillor James Browne, who assured the small number of temporary housing units at the site will be for families made suddenly homeless - not ‘neighbour from hell’ types which was the Molesey Conservative Residents’ concern - who Elmbridge Borough Council has a duty to house.
Currently when these cases occur they are put up in bed and breakfast in the London Borough of Hounslow at cost to our taxpayers.
Councillor Browne admitted that Elmbridge is “under pressure to meet housing targets” and is unable to compete with the deep pockets of private developers in buying new land for affordable homes. So it has to make the most of sites that are owned by EBC and Paragon such as this one.
With things having gone a ‘little too quiet’ recently, Steve got in touch with Paragon on February 12.
Mr Whelan, the director, revealed that a planning application would be submitted for the scheme in around April this year.
Until then the plans are being revised in response to residents’ feedback from the consultation.
Mr Whelan said: “We are looking at the mass to see if we can reduce the impact, and are generally trying to see if there are things we can improve following the consultation.”
Paragon will revisit the School Road entry idea with Surrey County Council and has promised to assist Sandra House residents in finding alternative accommodation.
Both sites will be demolished and built at the same time as one another for reasons of cost and to avoid unnecessary disruption.
Email us if you are concerned.
Posted by Steve Bax at 13:10 No comments: