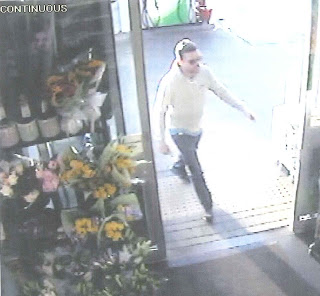 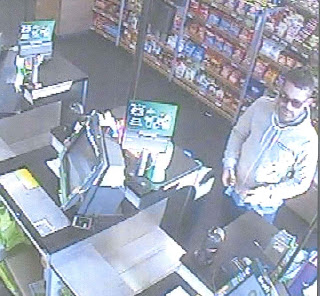 Do you know the man in these CCTV images? If so Surrey Police would like to hear from you.

The man is wanted in connection with a burglary in Beauchamp Road, East Molesey, which happened on July 11th. Offenders entered the property  between 6am and 7.30am and stole a wallet and a briefcase from the hallway table.

A bank card from the wallet was used at the BP service station in Hampton Court Way and at Tesco Express branches in The Broadway, Surbiton, and Hook Road, Surbiton.

Detective Constable Alan Gardiner told the media: "We have released CCTV images which show the bank card being used after the burglary. We would like to speak to this man in connection with the offence and to anyone else who may know who he is or have more information about the incident."

If you can help, please contact Surrey Police on 101, quoting crime reference number 45150060016 or by using the online reporting system found here. Alternatively the independent charity Crimestoppers can be contacted anonymously on 0800 555 111.
Posted by Steve Bax at 12:01 No comments:

Residents have voiced concerns to us about the difficulties they have had obtaining appointments at Glenlyn Medical Centre and the turnover of staff.

Councillors Szanto and Bax requested a meeting with the practice manager Caroline Self, and were invited to see her at the Giggs Hill Surgery in Thames Ditton.

At that meeting, with two other Molesey councillors, she informed us that Glenlyn in East Molesey and the Giggs Hill practice had merged on April 1st. Both will retain their identities but joining together allows them to realise economies of scale, share resources and improve their viability, while hopefully also improving their offering to residents.

Caroline acknowledged it had been a difficult few years for both practices, with funding cuts as the main pressure. From July 6th they introduced urgent care clinics. The idea is that a patient calls their usual surgery and if the matter is urgent they are directed to Giggs Hill, which is based at the Emberbrook Medical Centre in Raphael Drive, Thames Ditton, for treatment by Advanced Nurse Practitioners (ANPs).

The urgent care clinic is also being provided for four hours on Saturdays and Sundays, we understand, which should reduce the burden on A&Es.

Routine GP appointments, long term or complex conditions, referrals and reviews, will be at Glenlyn, and they say the new system will allow 100 additional appointments a day than currently.
More doctors and ANPs are being recruited, we understand.

Clearly some will be unhappy about having to travel further in some cases but the practice(s) hope this will be balanced by the improved service. Steve and Pete are due to have a follow up meeting with Glenlyn in October to discuss how the changes are working.
Posted by Steve Bax at 13:00 No comments:

At the election your Molesey Conservative councillors promised to do all we can to achieve a positive outcome at the Jolly Boatman site. With this in mind Steve Bax and Peter Szanto recently attended a meeting with the new developer of the Boatman site and other interested local parties.

We are pleased to report that it was a very productive meeting and we found the new developer to be open, frank and willing to engage with the community’s concerns. They were aware of the strength of feeling in Molesey against a hotel on the Jolly Boatman as it would be unsightly and obscure the stunning views of the Palace from the East Molesey side of the river.

The developer has planning permission for a hotel on the site but is willing to explore the viability of an alternative plan that removes the hotel and instead the Jolly Boatman land would become a public open space connected to Cigarette Island Park.

We discussed the pedestrian safety issues in Cigarette Island Lane and the developer promised to take these into account when putting forward the new plans.

There is still a long way to go on this and we will try to keep East Molesey residents up to date on developments.

Steve Bax said: “We had a very constructive meeting and left with grounds for optimism. However it is still early days and the danger that the existing planning permission could be implemented has not abated, so we have to proceed with caution and continue to engage the new developer. Peter and I, together with other stakeholders, will make every effort to bring a new plan to fruition.”
Posted by Steve Bax at 12:55 No comments: