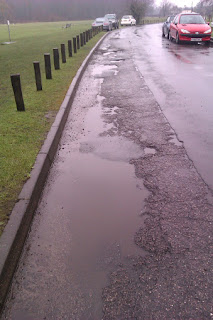 Nice to see the sun out on Saturday (for while anyway). It was a far cry from last weekend when my supporters and I, braved, wind, sleet and rain to get our newsletter through doors in Esher. If you've read it I would be interested to hear what you think.

While delivering in West End on the Saturday I took this photo of the  potholes in Winterdown Road and passed it on to Surrey County Council's Highways team. The Conservative administration at County Hall has promised to bring all of the county's roads up to a good standard within five years, and is spending £25million for a blitz on potholes. Surrey residents can report any roads that are in need of attention by emailing impovemyroad@surreycc.gov.uk

On Thursday I was in Lower Green with local residents and Sharon Butler of Elmbridge Housing Trust (EHT), who own many of the properties in the Douglas Road area. We pointed out the lack of available parking which has resulted in residents having to park on grass verges, making them unsightly and having the potential to damage underground pipes. We made a case for additional parking bays to be created to address this existing problem, and warned that things will get a much worse when Cranmere School moves to land behind Arran Way and increases its intake from the current 390 to 630. This will bring hundreds of cars to these streets and could be unbearable for residents unless action is taken now.

The EHT view is that it has no money to spend on parking spaces but would be willing to accommodate Surrey County Council were the county to get its cheque book out. Muddying the waters a bit is the fact that many properties are in private hands and EHT would effectively be creating bays for those who are not its tenants (bays can be rented or sold to private residents of course, covering the cost). I personally believe BOTH Surrey and EHT will need to contribute to a solution and I will - with parents and local residents - keep up the pressure for a solution to be in place before the expanded Cranmere School opens in 2015. Surrey has said it will pay for bays along the railway side of Douglas Road, with a figure of 80 mentioned, but the location is less than ideal as space is limited and would require parents and children to get in and out of vehicles while exposed to the passing traffic (and lorries). A worrying situation.

A meeting is being arranged between all interested parties - parents, residents, police, EHT and Surrey - hopefully at Cranmere School in late April or early May. I'll post more details as I have them.

Moving the memorial will ensure dignity 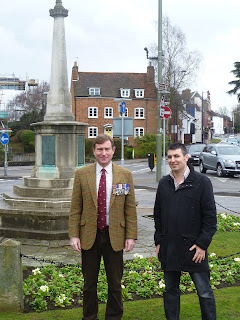 Steve Bax and Esher ward councillors have recruited a decorated local army veteran to help with a plan to move the war memorial to the centre of Esher Green.

We think public safety could be improved on Remembrance Sunday if people didn't have to stand in the road and services would be more dignified away from the passing traffic. So we have teamed up with John Handford OBE, a retired colonel from Esher to draw up plans and raise funds with a view to moving the memorial by 2014 - the 100th anniversary of the start of World War I.

Mr Handford was with the Parachute Regiment and served in Afghanistan and Northern Ireland. He said: “I am driving this forward on behalf of our community who I know respect our Armed Forces and particularly those that have fallen over the years.”

The memorial will remain in the line of sight from Church Street and will not be enhanced or embellished.
Esher councillor David Archer has obtained a quote for £14,000 for the work and said the money will come from fundraising rather than the public purse. 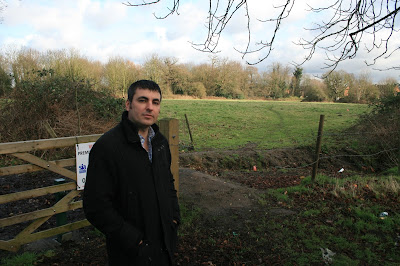 Steve Bax has been meeting with parents who are concerned about the congestion and safety issues that could result from plans to expand Cranmere Primary School.

Surrey County Council is responding to an urgent need for more classroom places by building a new Cranmere on land behind Arran Way in Lower Green (pictured) , which will accommodate up to 630 pupils and a nursery when it opens in 2015. That is potentially a lot of school run cars and there is barely enough parking capacity in nearby roads as it is, as evidenced by people parking on grass verges.

Cranmere Community Traffic Concern (CCTC) is group formed of local residents and Cranmere parents who are calling on the council to address the parking situation as part of the school redevelopment. They would like a drop-off zone on the school grounds with an exit to Farm Way, and extra spaces created in Douglas Road for residents. There is also a concern about the safety of children from lorries which regularly use Douglas Road on their way to and from the industrial estate.

Steve has teamed up with CCTC to help make progress on this issue. We have raised our concerns with John Farrer, the project manager of the new Cranmere, down at the scene and are in talks with Elmbridge Housing Trust about creating additional parking capacity in Douglas Road. This may require funding assistance from Surrey CC which Steve will be in a position to push for if elected.

He said: "The new school will be a superb modern facility for the children and the wider community. But it is vital that Surrey addresses the very real concerns about congestion and children’s safety that will most certainly arise from moving the school to Arran Way. I am - and will be - pressing for joined up thinking on this issue."

Recently Surrey Police has written to residents asking them not to park on the grass verges. Nobody wants to see the verges turned into a messy quagmire, as has been happening, but Steve's view is that enforcement would not be helpful at this time. Far better to wait until additional capacity has been created.