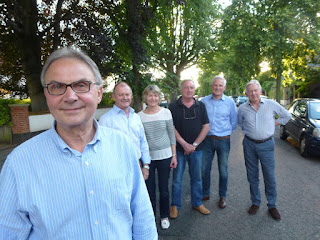 Earlier this year we prepared petitions for roads near Hampton Court station asking the Surrey County Council Parking Review to address a long-standing problem over weekday rail commuter parking blocking all spaces on roads near Hampton Court station rather than parking in the under-used station car park. The petitions were overwhelmingly supported by 356 (82%) of residents and 52 (88%) of retailers and traders.

The Parking Review has now been completed and was presented at the Elmbridge Local Committee meeting on Monday 3 October. Our proposals were rejected out of hand with the review team not even bothering to consult us or any of the road leads who were involved in preparing the proposals!


Searching questions were asked at the Local Committee meeting by Conservative councillors from other parts of Elmbridge who understand the problems we are facing but it became clear that Molesey’s councillors, all of whom are from the Molesey Residents Association (MRA) are wholly against our proposals. Comments made by the MRA Councillors cast doubt on the veracity of our petitions, the motivations of our residents and the needs of our valued retailers and traders - some of the MRA’s comments are printed below. (Ernest Mallet MRA: EM, Stuart Selleck MRA: SS):

"This is a petty proposition, being advocated by residents who don’t want people to park outside their houses" (EM)

"I believe that if the petitions were done properly, the majority would not support the proposals" (EM)

We have not given up on this so we now feel residents should register their disappointment that our well-researched and strongly supported proposals were rejected out of hand based on an inaccurate rationale and understanding of what we are trying to achieve.

We may yet be successful in persuading SCC and our reluctant MRA Councillors to listen so we ask you to make your views known by emailing the SCC Officer who led the review, Adrian Harris (adrian.harris@surreycc.gov.uk) with cc’s to the Chairman of the Local Committee, Margaret Hicks (margaret.hicks@surreycc.gov.uk) and to Peter Szanto (moleseypete@gmail.com). It’s important that every resident who signed the original petition now backs that up by sending a protest email as there is nothing the MRA would like better than to kick this into the ‘long grass’ and for it never to be seen or heard of again.

It only took 52% to take the UK out of the EU so why is it possible for the MRA to ignore 82% of local residents – MRA’s ‘democracy’ in action!
The reasons given by the SCC Parking Review Team for rejecting residents and traders proposal to introduce a one-hour weekday morning parking restriction in roads near Hampton Court station are flawed. The reasons for rejecting in the report are shown below in black. The responses in support of the proposals are in red. These were not listened to by the Molesey Residents Association Councillors.

2.6 We have decided not to progress this idea further for the following reasons:The residents in these roads, broadly speaking, have significant levels of off street parking, and therefore have little need to use the on street parking space. Our policy is only to introduce a permit scheme where residents have real need to park on street, and where there is little orno off street parking available.
The parking strategy agreed by the local committee looks to stop introducing schemes that can cause displacement. This scheme would certainly displace vast numbers of vehicles, probably to streets that are already under heavy parking stress, and where residents have less off street parking (e.g. Kent Road, Park Road, Pemberton Road).
The existing uncontrolled space provides opportunity for local workers, who may be on relatively low pay, to park and work in the local area.
There are already limited waiting parking bays for shoppers in the Hampton Court area, such as Bridge Road, and Creek Road. It is difficult to conceive that there is a need to create what would be two or three hundred more parking spaces for shoppers to the area.
Particularly in the case of Palace Road and Wolesey (sic) Road, if parking were restricted to residents only for an hour, it is likely that both traffic flows and traffic speeds would increase dramatically in these roads over that time period. The current parking practices here helps to slowtraffic.
We have in the past introduced controls to prevent obstructive or dangerous parking, and we are looking to introduce a couple of additional sections of yellow line within the area to eliminate furthersuch problems (see Annex 1). However, we do not think that congestion or safety issues are prevalent in these roads.
As a county council, one of our key objectives is to help support the economy. Removing all day parking from all of these roads could damage business and have a knock on impact on the local economy of the area
In the past it has also been suggested that parking should be controlled here to enable street cleansing. This is not a valid reason to introduce permanent parking controls. Parking can be temporarily suspended to enable street cleansing operations, as is the practice that happensacross the county already.